Photogrammetry holds much promise for the documenting of archaeological work, as we have demonstrated over the last two years.

I have been experimenting recently with additional techniques.

As you may recall, one student recovered a small Byzantine storage jar that was intact. 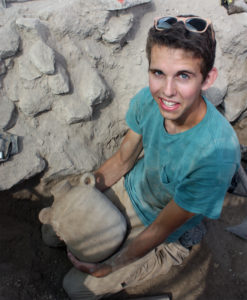 But when I tried to make a 3D model of the jar, the result failed.

Attempt at a storage jar
by Dr. Mark Schuler
on Sketchfab

The software could not find points on the jar to construct the bottom.

I have also attempted to make models of larger sections of the site. My first attempt at the south half of the House of Tyche came out rather well, except for a hole in the west wall next to Cardo 3N.

South half of the House of Tyche
by Dr. Mark Schuler
on Sketchfab

‹ About the project…› Dez and Ben at Arky Day