As we have attempted to interpret the material remains from the northeast insula, we have relied on small finds, architecture, inter-connectivity of structures, and inscriptions. What we have lacked is an inscription from the church complex to help us in our understanding. Is the complex a monastery? Who is the elderly woman in the revered tomb?

This week while working on the northerly building, we began to recover  clusters of tesserae that apparently were part of the mosaic floor on an upper level of the building.  The clusters are relatively small but quite tantalizing. 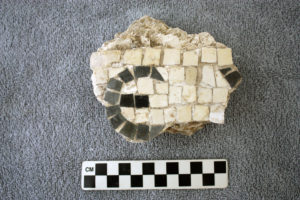 This cluster has a finely formed epsilon followed by a space and then the beginning of a lambda or an upsilon.

I am making a bit of a guess on this one, but I think it may be a theta. 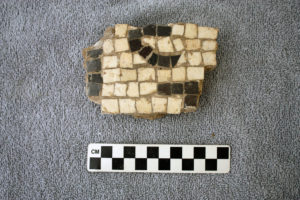 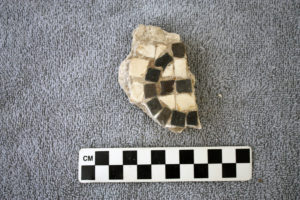 I am more confident that this letter is a theta. But I could be wrong. 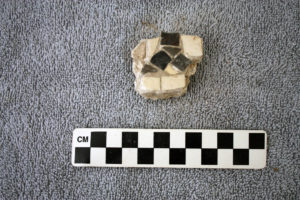 Another guess . . . the bottom portion of an omega, or the top of an upsilon, if flipped over.

We have some additional pieces with colors and hope to recover more tomorrow. Alphabet soup, anyone?