In 2009, the Concordia Team discovered an inscription honoring Tarius Titianus, a governor of Syria Palestinae. On the third day of the 2011 season, a sharp-eyed volunteer, Concordia student Meghan O’Neill, spotted a stone with Greek writing on it in the area she was excavating. The find turned out to be another portion of the same inscription, providing the motive for so honoring Tarius Titianus … he was considered the “patron and builder of the fatherland.” Meghan’s discovery brings together the original inscription, an inscribed block found by the Haifa team in 2008, and this new piece to place Hippos well within the practice of Roman government and action in the Greek east which was honored by local citizens with such inscriptions. 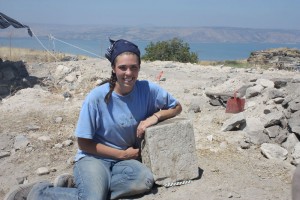 Fly through the NIP